Our eyes and legs enjoy a swerve. A serpentine turn or luscious curve. We live in a tyranny of straight lines, in a universe of square boxes. Ours is an age ruled by perpendicularity. But we also need voluptuous swirls, sensuous spirals, looping swerves, sumptuous swooshes, and fanciful whorls. They help us to enter into and conduct ourselves through the flow of things and to establish or recover bodily rhythm. 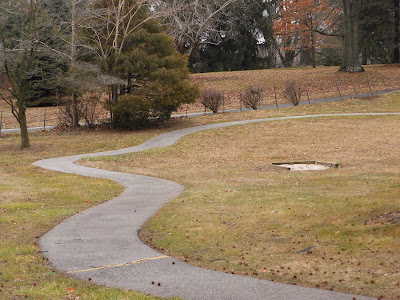 Start counting the number of straight lines in the room you occupy right now, and you may be sitting there until kingdom come. They likely govern the patterns in the ceiling and floor, the structure of the furniture, windows and doors, and so much more from the hundreds located in the configuration of a single razor blade to those found in the format, composition and content of books, to the lines inherent in the very construction of the building itself. 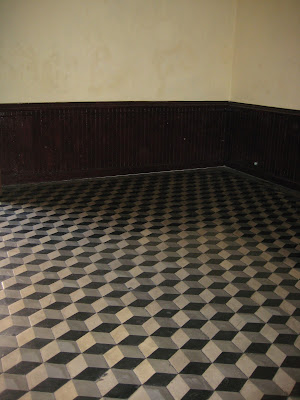 Now, step outside on a path with alluring curves, and you just may be drawn into a world of ever-proliferating wonder and probably a few surprises and hidden secrets. Rarely, in fact, does one encounter a distinct right angle in the natural world, except perhaps at a less perceptible, more microscopic level: in, say, the veination of leaves or the cleavage of minerals and rocks. Nature, we could provocatively claim, appears to abhor a straight line. 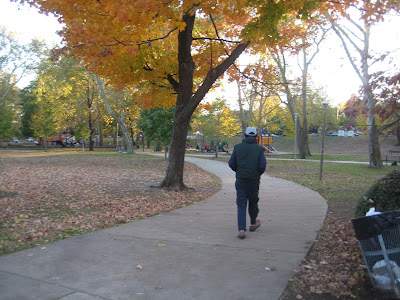 The English painter, printmaker and critic William Hogarth first speculated that an undulating or serpentine line provides the basis for a powerful experience of—and hence theory about—visual beauty. He studied reactions to a range of shapes in women’s corsets and discovered that people often prefer those with a particular curvature. From such a perspective, an “S-curve” can generate a seductive aesthetic tension between variety and uniformity. Too great a deviation from such a norm is exhausting for the eye; to little courts the risk of monotony. The serpentine line can be found in a great range of aesthetically interesting phenomena from the decorative elements in fashion to the curves in a woman’s body, and it may be responsible, in part, for creating a type of more objective—or at least inter-subjective—beauty. 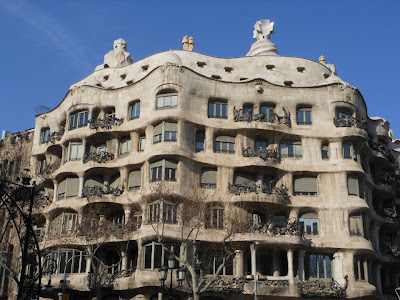 Artists and architects, of course, occasionally challenge the hegemony of the straight line, right angle and square frame by introducing curvature into their works. Both Antoni Gaudi and Friedrich Hundertwasser employed playful curvilinear forms in their buildings to great success and delight. Hundertwasser, in fact, authored a “Mold Manifesto” that critiqued the proliferation of straight lines, bland functionalism, and blind adherence to rationalism in architecture and, in turn, celebrated the fluidity one finds in more organic shapes and materials. “It is time people themselves rebelled against being confined in box-constructions, in the same way as hens and rabbits are confined in cage-constructions that are equally foreign to their nature,” he wrote. He added: “This jungle of straight lines, which increasingly hems us in like prisoners in a jail, must be uprooted. Until now man has always uprooted the jungle in which he found himself and set himself free. But first he has to become aware that he is living in a jungle, for this jungle has grown up surreptitiously, unnoticed by the population.” Hundertwasser extended this perspective to include physical movement as well:  “The line I trace with my feet walking to the museum is more important and more beautiful than the lines I find there hung up on the walls.” 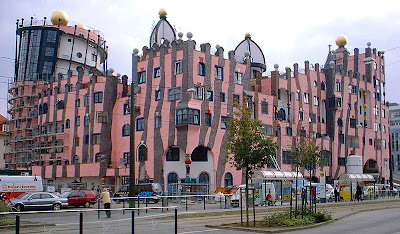 With sidewalks and other walkscapes, alternatives to or disruptions of the uniformity and predictability of the grid plan can serve as welcome aesthetic features in an urban environment, introducing novelty or the unknown into the experience of place. In rural areas, some streams that have been straightened (de-meandered) to expedite the goal of efficiency in water delivery have been later re-meandered so as to return previously existing curves because of strong local protests and reactions against the straightening of the water flow, which leads inadvertently to “blandscapes” or a sense of boredom in travel by boat or foot. 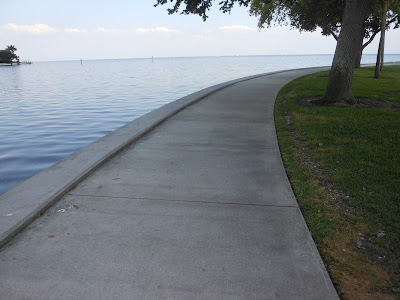 In a broader sense, what we are here considering is the “shape” that a walk takes, the particular geometric form, experiential path or dynamic pulse that it follows, responds to, or amplifies as one journeys through place. Thoreau, for example, confessed to walking frequently in a parabola, “like one of those cometary orbits, which have been thought to be non-returning curves.” 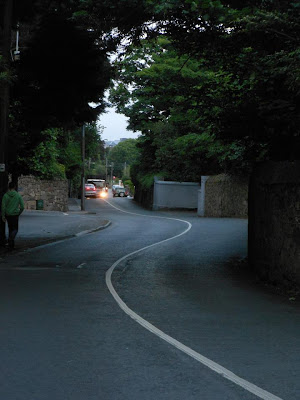 “A line is a dot that went for a walk,” the artist Paul Klee once proclaimed. Indeed, this very point (claim) seems designed to set static points (dots) in motion and to link them with other geographical positions or aesthetic dispositions. The video below is one short illustration inspired by Klee’s proclamation:

Klee, too, spoke of drawing and, by extension artistic creation, in terms of “taking a line for a walk.” Here, the hand assumes the role of the foot in movement across paper, generating a path that evolves into an image or picture. What the remark likewise gestures toward is the notion that there are vastly different kinds of lines just as there are sundry styles and types of walks. A penciled or painted line, like a walk, can ramble and wander or proudly strut about or dawdle in minute, impressionistic details, or rush headlong to a pre-given destination.

Interestingly, one artist has combined the actions of the hand with those of the foot into a piece he styles, “Walking Drawing.” Essentially, Tom Marioni strolled back and forth between ends of a long horizontal sheet of paper affixed to the wall while drawing utensils were attached to his body at the hip. The work both records his actual walk—his paces across a measured space; his repeated comings and goings—and also depicts a rolling landscape via a series of undulating brown and green lines, intimating an autumnal scene.  It invites us to ponder the question, “Did the walk fashion the work (and the landscape itself make a picture), or did the work inspire a walk (and the resultant picture form a landscape)?” In either case, the conscious activities of the walker (artist), though initially intentional and directed, are downplayed, subordinated to the activity of walking itself, which asserts its own creative potential. The title of the work—composed of two present-tense verbs, walking and drawing—redoubles the ambiguity and suggests the chiasmatic and bivalent aspects between walker and walk; art and earth; motion and static representation, and even reader (critic) and landscape (text). The drawing is accomplished via the line of walking and is itself a drawing of walking. The work reminds us quietly, too, that walking involves a form of cyclical rolling—from heel to ball to toe of foot and back again—as one old English etymology for walk, from “to roll” or “roll up”, suggests.

In San Francisco, I once chanced across and followed a purple painted line that snaked and wended its way along the sidewalk through the Mission District of the city for quite a few blocks.  As I pursued the continuous marking, I was in a sense also “drawn” into the neighborhood myself, anticipating a possible surprise or revelation at its eventual terminus. 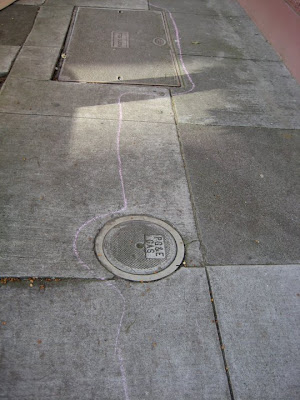 In New York, an artist known as Momo painted a thin orange line that travels around the city for eight uninterrupted miles—through SoHo, Greenwich Village, and the Lower East Side—spelling out his name in the process on the streets and sidewalks. Apparently, New Yorkers have walked upon the colored trace—the world’s largest graffiti tag—for years without realizing it. Momo put together a short film (below) of the line, which was inspired by a series of purple footprints emblazoned on the sidewalk that he had seen and followed as a child. The path they formed stretched around the city and led to a community garden space named “The Garden of Eden” which the city, unfortunately, had bulldozed.

Another artist, Eve Mosher, has used a winding waterline as a way to show the dangers associated with rising seas caused by global climate change. She walked and chalked seventy miles of New York City to generate a line that indicates where the floodwater will be when it rises ten feet.  As she walks the line, she learns about and speaks directly with members of local communities concerning the effects of global warming. Recently, I had the chance to speak with her at The Chemical Heritage Foundation Museum in Philadelphia, where the second of the following two videos was produced:

Walking, then, involves both predictable choices and unusual chances for exploring placescapes in either straightforward or more meandering ways.  When you are finished reading this brief meditation on ambulation and done with stationary “surfing” on the Internet, you might consider stepping outdoors and taking a line for a walk . . . or maybe going for a slow stroll with a curve.  Enjoy! 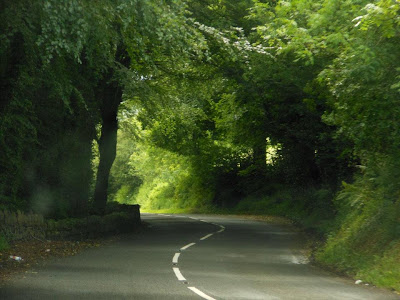