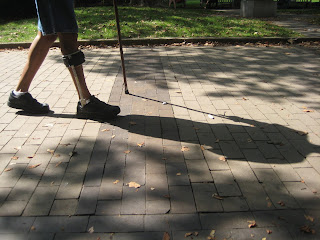 Like all forms of travel and transit, walking involves a methodos, a way through the world and thus a choice of routes in the environment. There are classic distinctions that can be made in the basic elements of any town or city, and five in particular have been identified by urban thinkers and planners: paths, edges, districts, nodes and landmarks. Paths are channels along which people move, whether potentially, habitually or sporadically, and where they lack identity or are easily mistaken for one another, the entire image of a place can be called into question. Sidewalks are one of the most prevalent manifestations of the path. As the word itself suggests, side-walks are in one sense the exteriors and margins of the roads, the “suburbs” (so to speak) above-the-curbs of the streets. In another sense, they are the thresholds of storefronts, houses and parks that they ring, directing people to their destinations.
Sidewalks hold a vital place in our towns and cities, literally providing a platform for public life and an artery for regular citizen interaction. Their absence in many suburbs is a sign not only of the decline of walking but of the transformations that occur in exurbia, the domain outside the city landscape. Sidewalks, which are designated legally as public spaces, offer needed transitional realms between the intimacy of the home or the privacy afforded by the porch on the one hand and the frenzy of traffic or the anonymity of the streets on the other hand.
Good sidewalks can be evaluated in terms of their integration into the communities of which 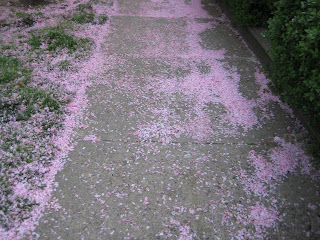 they are part. In fact, it is likely that the peace of a neighborhood is not kept primarily by the police or by local laws that might be promulgated and enforced. Rather, as urban critic Jane Jacobs has argued, it is maintained “by an intricate, almost unconscious, network of voluntary controls and standards among the people themselves [such that] a well-used city street is apt to be a safe street. A deserted street is apt to be unsafe.” Following the work of urban sociologists and community planners, there seem to be a number of criteria that can be adduced and defended with regard to developing and maintaining places for walking.

First, sidewalks should be continuous and uninterrupted as far as this is possible in order to ensure the free movement of pedestrians. From the vantage point of local businesses, a regular pedestrian flow irrigates and nourishes the city and town centers and sites of enterprise. In Europe, a positive result of meeting this requirement is that “pedestrianized” areas frequently retain the strongest local economies. In this sense, it might said that where the sidewalk ends, so too ceases the community.


Secondly, sidewalks need to be both clearly defined and safe from the threat of encroachment by cars and other vehicles, which must be repeatedly reminded that they share the world with walkers. According to federal sources, vehicle accidents involving pedestrians are twice as likely to occur in locations without sidewalks or appropriate pathways. 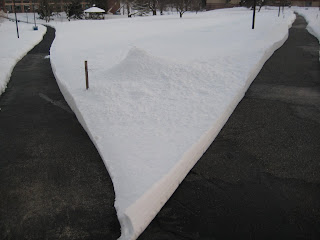 Thirdly, sidewalks, moreover, must provide easy access to the destinations that pedestrians seek. The organization of walkways prior to an understanding of the places where people actually do walk or need to go can lead to problems. This dilemma is evident in parks, on college campuses and other urban locations where sidewalks are often set up in advance of walking patterns, creating a criss-crossing and forking system of used, semi-used and unused paths that can be visually objectionable and practically unmanageable.
Fourthly, sidewalks should have a rhythm that enhances, facilitates and encourages walking and that is related aesthetically to the landscape and surrounding objects and buildings. This requirement suggests that walking may possess a musical dimension (more on this later) that is both spatial and temporal, one that is orchestrated and “played” as one is drawn by the progression of organic and inorganic “notes,” architectural “scores” and visual “riffs” one encounters in the language of the landscape: the arrangement, repetition or syncopation of doors and fences, rows of trees and parking meters, clusters of benches, lines of windows, columns and telephone polls, planters and flower boxes, roof tops and even the regular cracks in the pavement. As we walk, we are propelled forward—as in a song—through expectation and anticipation and toward realization of another moment (place) that is intimately bound with and conveyed by preceding instants (locales). 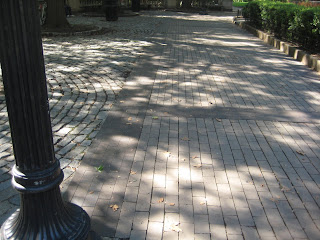 As urban theorist Mike Greenberg suggests, “If the stride, roughly twenty-five to thirty inches for most adults, is the basic pulse of the pedestrian’s encounter with the city—the beat of the music of the street—then it seems reasonable to propose that the next level of grouping might comprise events that occur at some small multiple of strides, two or three, or at most four.” To this advice we may add a complicating perceptual twist: “A real building is in a state of flux as the people who see and use it are themselves in motion. As one walks along the street, buildings advance and recede, blanch and blush, spin on their toes and play hide-and-seek, reveal their seductive ankles or their proud heads.”
Finally, sidewalks should be built to accommodate effectively the many necessary public objects that are part of daily urban and suburban life such as mailboxes, newspaper boxes, benches, utility poles and bus shelters. This demand, of course, seems to mean that sidewalks should generally be wide-walks (we might say) so that the walker is not further marginalized in the urban environment. 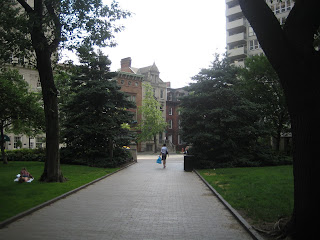 An MIT study—the first of its kind—in which researchers recorded the impressions and later tested the memories of twenty-seven people as they walked one by one around several blocks in Boston (along Boylston Street, through an alley, onto Newbury Street and into the Public Garden) provides some empirical information on the perceptions and attitudes of pedestrians in an urban environment. Spatial form—particularly spatially dominant buildings and open areas (such as a park)—is a major impression that registers on and remains with most pedestrians, followed by the quality and characteristics of the sidewalk or city “floor” and then the details or content of the fronts of stores. (Few walkers commented on the sky, colors, wall materials and textures, upper floor fascades, overhead wires or doorways.) 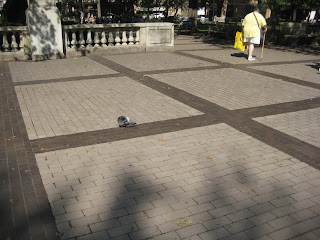 The spaces best recalled by walkers seem to be those that are either defined clearly or that represent breaks in an overall continuity. Sixteen of the twenty-seven participants in the study remarked on the very accommodating width of the Boylston sidewalk, including its state of repair or occasional rough surfaces, which can jar one out of a regular rhythm. The experimental pedestrians were very conscious, too, of “visual clamor” and multiple street signs, and there was a widespread sense of the dramatic differences between the back alley occupations of seamstresses, for example, and the well-dressed shoppers on Newbury Street, indicating perhaps a sense of class distinctions that are visible in a short and relatively average urban walk. The walkers showed as well some awareness of and concern with the presence or relative absence of trees and revealed pleasurable feelings upon entering the green space of the Public Gardens (in contrast with a general distaste for the alley and an annoyance with auto traffic, though only once they had to cross it).
More generally, the research indicates how walkers are constantly searching for or injecting order into their surroundings so as to make sense of their disparate impressions and to join their perceptions into a coherent picture. To this end, many walkers tend to divide a walk into distinct regions—in this study three in number—and whereas relative newcomers to an urban landscape are not able to discover between-spaces and places, the more experienced native is able to find similarities (though often imagined) between buildings, blocks, streets and neighborhoods.
More on sidewalks soon.