Walkers and Watchers: Eyes in the Sky 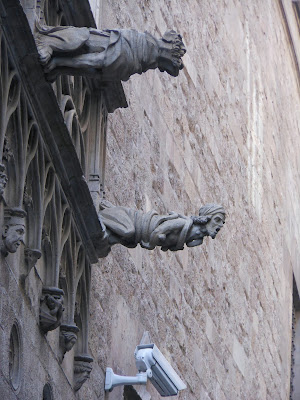 In the cultures of the ancient Etruscans, Egyptians, Greeks, and Romans, gargoyles watched over the lives of walkers, wayfarers and wanderers who picked their way through the alleyways and public squares. Assuming the form of fantastic animal figures, glowering human countenances, or grotesque chimeras, they gazed down upon the hoi polloi and oversaw the energy of the bustling city street.

Gargoyle is related to the word “gargle,” as in the gurgling waters that coursed through these architectural adornments, which were often shaped to serve as decorative but functional drainpipes.

Now, of course, most pedestrian thoroughfares are surveyed instead by faceless cameras that register and record our every movement, conversation or purchase. We’ve come a long way, but sometimes it’s difficult to admit that we have not always taken the best route.  As you walk about, remain aware to what you might happen to visually discover, but also try to attend to who (or what) might be observing you.  To be sure, sight is usually a multi-directional event.  To see is to belong to a world in which you will also be seen and revealed.

Here (above) on the wall of a church in Barcelona, you can catch a glimpse of the historical juxtaposition and transition from stone-faced eye-witnesses to the disembodied electronic eye of modern technology.  And here (below) some living "gargoyles" in a delightful flight of fancy have taken over the drainpipe on a temple wall in India.

Be alert, walkers, the world is watching. 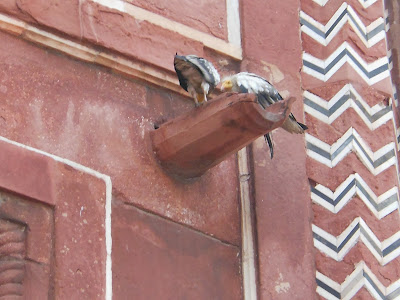