Walking occupies a special role within Eastern philosophical thought and daily practice. Throughout Asia, sages and monks have sauntered the countryside for centuries in search of enlightenment. Walking is even accorded a place as one of the “Four Dignities” (key modes of being and integral bodily postures) in China, along with standing, sitting and lying. 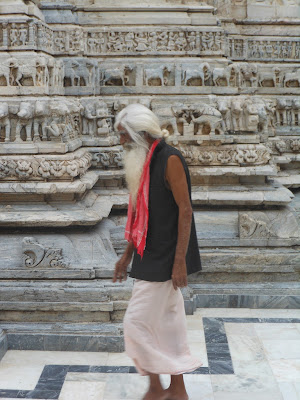 Buddhist classics such as the Dhammapada—which literally means the dharma (truth or law) of the foot, path or step—regularly celebrate the virtues of walking as a method and living metaphor for how to conduct one’s life. The work espouses, in particular, the merits of an “Eight-fold Path” for responding to the recurring phenomenon of human anxiety and pain (dukkha). “Walking upon this path you will make an end of suffering,” it declares. 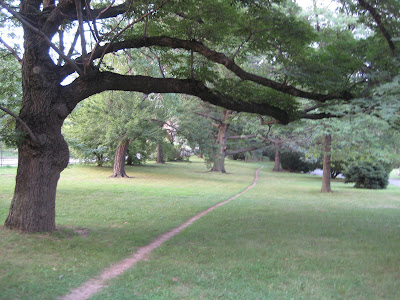 This embodied language is further extended: “If you find an intelligent companion  who will walk with you,  who lives wisely, soberly, overcoming all dangers,  walk with that person in joy and thoughtfulness.” While adhering to the imagery of a path, the Dhammapada advocates an ethics of both vigilance and diligence: “Good people walk on regardless of what happens to them.” 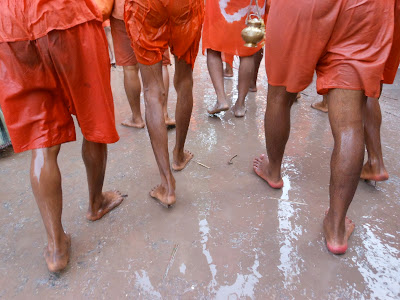 The most popular Taoist book, Tao Te Ching, similarly counsels “the way” as a route through life that is physically and metaphysically walked. We read, for example, “Gladly then the Way receives/Those who choose to walk in it,” though we also encounter a warning that movement on foot is not always such a straightforward or linear enterprise: “He who tiptoes cannot stand; he who strides cannot walk.” Still, the Chinese character for the elusive and mysterious Tao 道 consists of two parts—one referring to the human head and the other to walking—thereby connoting a genuine path or journey through the inhabited world. “A person's heart and mind are in chaos,” a Taoist text reminds us. “Concentration on one thing makes the mind pure.  If one aspires to reach the Tao,  one should practice walking in a circle.” 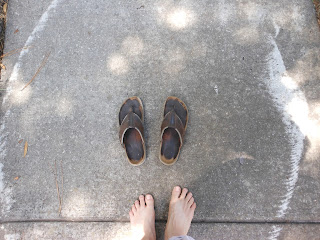 Within Zen Buddhism, koans—riddling remarks put to practitioners—might inquire, “What is Zen?,” and tack on paradoxical replies such as “Walk on” or “Walk without feet,” in an attempt to propel one towards satori, a sudden insight into the nature of things. At the entrance to many Zen monasteries, too, one often finds a sign with the words, “Watch your step.”  This message, of course, implies one should take care as one walks, but in another sense it advises us to be forever mindful or watchful as we go about our everyday lives. Thus, when a 14th century monk asked his teacher, “What is the essence of Zen,” the Master responded, “Watch your step.” 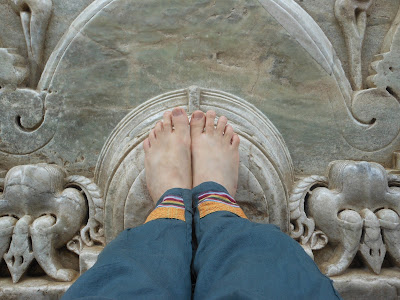 Through walking practices, one might even be “carried away” to the point where the goer (doer) passes completely into the going (doing). The walker disappears—is gone, “oned”—with the unfolding or ever-proliferating walkway. During the course of a walk in which one is fully present with the path being followed—the underlying earth, the ambient air, the shifting sounds, and emerging scents—one forgets and hence loses one’s shallow sense of “self,” which dissolves into the progressive movement. 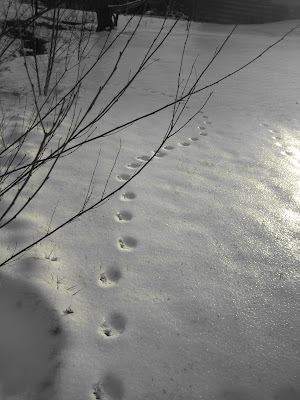 Dogen, the 13th century Zen Buddhist, even goes as far as to speak of mountains “constantly walking” in his sutras, opening up the possibility that nonhuman and inanimate entities exist, change and move (e.g., fall apart or relocate) in comparable manners to we humans. When we, in turn, walk like a mountain—ying-ing our yang, so to speak—we walk without walking. That is, we move meditatively, with openness and without a trace of self-importance.  In this way, walking grows into a robust trope and metaphor that bears, transfers, and carries practical thought, helping in the process to disclose and communicate the surrounding world to us in its particularity and beauty.  Movement, in short, generates meaning; it gives rise to spatial and temporal significance. 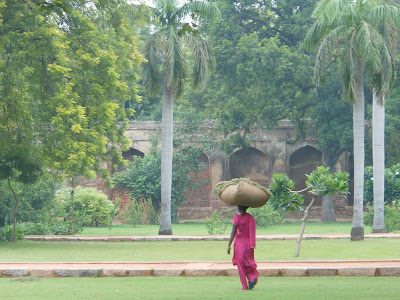 meditation, a Buddhist practice that occurs between periods of zazen

or seated meditation.  In Japanese, kinhin is formed of two

characters, one (経) that means “classical works” or “religious

teachings” and the other (行) that means “walk”.  During this practice,

individuals walk in clockwise fashion very slowly and deliberately while

covering the fist). Movement typically commences with the ringing of a

bell two times (kinhinsho). As one proceeds, a step is taken after each

full breath. The walking ends when the bell is rung once (chukaisho).

For those wishing to try it, here is a helpful video about kinhin:

An aim of kinhin is to improve mindful awareness of one’s actions and undertakings. Meditative walking provides an appropriate means to exercise or achieve such mindfulness because movement on foot is so habitual, ordinary, and routine to human experience. Walking is commonly an unconscious or pre-reflective activity, and to make it the object of conscious, deliberate and willful attention provides an opportunity for insight and learning. One might conceivably even experiment with this form of ambulation in more exceptional conditions that pose greater mental and physical challenges for maintaining focused concentration, such as walking in heavy rain, walking on ice, or walking with one’s eyes closed. I’ve engaged in kinhin on a number of occasions and found it to be a constructive counterbalance to protracted periods of reflection in a seated position. It also resonates with those persons who enjoy bodily motion or who may be unable or unwilling to sit for a lengthy time.

As Tich Nhat Hanh writes in Resting in the River, "Walking meditation meansto enjoy walking without any intention to arrive. We don't need to arrive anywhere.  We just walk. We enjoy walking. That means walking is already stopping, and that needs some training.  Usually in our daily life we walk because we want to go somewhere. Walking is only a means to an end, and that is why we do not enjoy every step we take . . . So this is a kind of revolution in walking. You allow yourself to enjoy every step you take.” 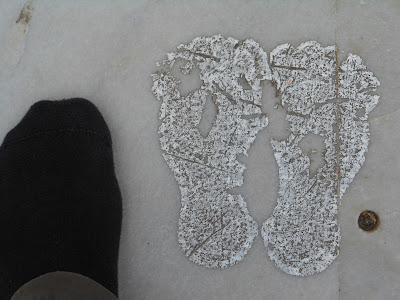 In the video below, a monk walks serenely at a snail’s pace through the crowded streets of an Asian city.  There is a hubbub of activity all around him. He lifts one foot and places it ever so slowly in front of the other.  He is ringing a small bell.  Our attention is halted, arrested. Perhaps we are torn for a moment from the frenzy of our own lives.  Perhaps we slow down as well and move a little more meditatively or mindfully. As a Chinese proverb puts it, “One step at a time is good walking.”

Posted by David Macauley at 4:58 PM