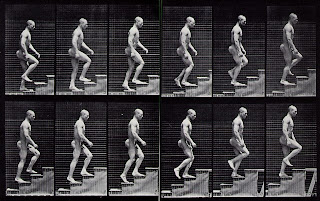 What is it to walk? This may be a sensible place to start. While I cannot undertake a detailed description (or close phenomenology) here, a few very general points can be made about the activity:
(a) Walking involves lifting and propelling. The body is taken up and thrust forward by its own energy and ongoing momentum.
(b) Walking entails rolling. From the heels to the ball and toes of the foot, sending us forward (bodily) but also backwards (to the heel) again. In fact, the word “walk” harks back in Old English to “wealcan,” to roll, and “wealcian,” to roll up.
(c) Thus, there is a circularity at work in the walk. This aspect is one that we can grasp as well when pedaling a bicycle, an action that resembles ambulation in certain respects.
(d) Walking involves carrying and self-conveyance. It is, in other words, a form of self-transport. Walking carries us to distant people and places, making them near. But we are also “carried away” in two other corporeal ways: first, by the sights, sounds and smells that we encounter and that direct us toward and through them. The elements in the atmosphere, for example, or the mood—as in the weather or a song—frequently bear and guide us. Secondly, we are carried by the places we walk and that hold us. We might note that the term “place” relates to “plat” (meaning broad or flat, as in “Plato,” who himself possessed broad shoulders and could certainly hold his own). That is, we are supported by the paths, trails or markings we follow in the wild or the side-walks, alleys, and promenades we plod in the city.
(f) Walking can be described as re-frequented falling. We teeter or lurch forward and then catch and collect ourselves before losing complete balance. Watch toddlers and older folks when they walk. They are ever in danger of falling.
(h) There is often a precariousness and vulnerability to the act of walking. We are exposed not only to the elements and to sounds or sights around us but to vehicles and potentially other “predators”.
More to follow . . .
Posted by David Macauley at 1:48 PM